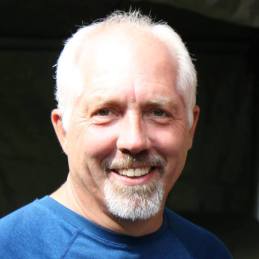 Bryan McCoy stood next to the doorway of the tiny room he shared with another YWAMer. Paintbrush in hand, he kept his wrist pointed up to keep the sweat from mixing with his paint as he deftly added the finishing touches to his storyboard. Having experienced much upheaval in his life over the previous few years, he was glad to be helping with a children’s ministry again, even half a world away.

This was near the beginning of our outreach together, and Bryan and I (along with several others) had been quite a team all week. The Vacation Bible School was drawing to a close, and he was preparing to bring the Gospel home for the group of 120 Hindu kids we were working with.

While I was a cosmic super-hero — able to draw laughter, love, and sympathy from dozens of denizens with a single goofy joke, and another, and another — Bryan was the consummate storyteller. Weaving the truths of God into active and fun story times day in and day out, he was writing the curriculum as he went.

We were privileged to be there in India. Despite the long drives and the sweltering heat, despite the cramped living conditions and unfamiliar food, we were richly blessed. What an honor to bring the Gospel of Jesus Christ to young people such as these.

“How beautiful are the feet of those who bring good news!”

Bryan has a passion for Asia and will be going on staff with YWAM’s Northeast Asia Discipleship Training School this coming year. Bryan is just one of several teammates who either are already serving in places like Ireland and Oceania, or are planning to launch soon just as we are.

We’re excited for Bryan, and Sarah, and Robert, and Ron, and Donna, and Sophie and all of the countless other workers who are being launched into the fields of the Lord! This past Sunday, I was reminded by my pastor about the fact that Jesus was a missionary. He laid down a life that no one could fathom even having, let alone giving up.

“The harvest is plentiful, but the laborers are few.”

Is God calling you to a life in missions? Is He calling you to leave behind your home, your cars, and your comfortable life to work in His fields? You might look and see a lot of people embarking on this journey, and indeed there are. But there is always room and resources for those He calls.

Partner with us. Partner with Bryan or one of the countless other workers that God is sending out. Be a part of what He is doing in the nations, just as you’re doing here at home.

After Bryan brought home the Gospel with his interactive storyboard I was given the opportunity to pray with the 120 kids there about accepting Jesus Christ. Countless hands were raised, and we prayed for the ministry that would continue to minister to those the Lord had called that day.

Maybe next year it could be you doing that!