Here in Berlin, we don’t have a theoretical Muslim refugee situation. And although it is still highly political, there is real flesh and blood and bone to it. We have continued to invest in the refugee communities nearest us. Having a regular, reliable presence has opened the door to honest communication, good and bad. It is from that position, as one who meets with people who have been forced to flee their homes, that I offer you a few anecdotes.

I met E at a language class that I attend infrequently in a refugee camp. He asked me who I was. I told him I was a missionary there to share the love of Christ. He told me I should watch a video and become a Muslim.

Being kind of bold in my approach, I humored him and watched this video later that day when I returned with a team. He carried an expectant look as I watched inane, obviously staged videos of weak “Christians” folding into Islam under the pressure of legalistic tricks played by a witty Imam. Seeing no end in sight to E’s patience and no opening for the Gospel, I ended our session, and this annoyed him. “That was rude. You should go home and watch more of the videos and become a Muslim,” he said in a menacing tone.

The following week I brought a team to that same camp and spied E showing his videos to the young missionaries I had with me. Feeling confident in Phillip and Seth’s salvation and dedication to the Lord, I let it go and only approached them when it was time to go. That’s when he looked at me with dark eyes, raised his finger at me and said, “You’d better think twice”.

This was the first time, in all of my time spent among the refugees, that I felt that someone was a potential threat. I am not daunted in the slightest way. 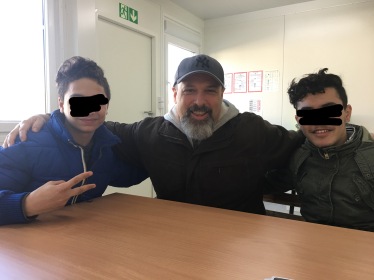 I first met M in a refugee home not far from where I live. Playing “football” on an outside basketball court with this kid was a frustrating and exhausting experience for this 50-year-old guy!

Later, in the fall, when it was too dark and cold to go out and play football, he invited me to play some foosball on a decrepit table. He was as good at the table version as he was at the outside version. I later raised funds to get a better one for the camp. And then, months later, that camp closed, and M was shipped off to some other camp (and the table to still another).

M wanted to play Uno because we had just found each other again. After visiting several camps and setting up ministry, I had shown up at his camp with a team. We were prepared to go to several camps that day in hopes of setting up something for them to do, but we only needed to go to one.

As I was leaving, M wanted me to stay. He wanted hang out and be friends again. When he said “I have Uno”, I didn’t get it at first. I said, we’ll play when we come back on Monday, but he said let’s play now. And then I realized that in all of my excitement, I had forgotten to lay down my plans for the day. I had my priorities wrong. So we hung out, played games, and met the camp director, a believer who was praying that morning for volunteers to come. 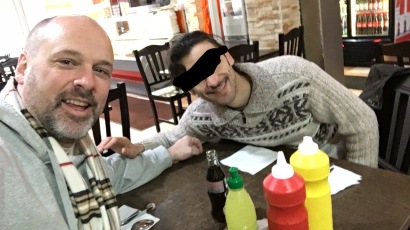 “I have a manuscript,” announced A, and he went to get it. Excited to see some English speakers, this Fallujah native presented me with a ream of printed pages. I don’t know if he thought I might be a Hollywood agent or a book publisher, but I humored him for a bit.

I would see A from time to time at the camp, and then at another, where is is living now. Having lost his entire family in a raid by the Iraqi army, he was bitter and even seriously contemplating a suicide attack back in Iraq. He simply could not find a reason to go on. I took that opportunity to profess the love that Jesus has for him. I told him that the God who made him cared for him deeply and had not given up. I prayed for him.

Later, I saw him and invited him to sit with me for tea. Looking across the table at this man, I realized all at once that I loved him. I knew that he was my brother, and I could easily identify with him in his pain. It was a moment in the trenches together, and we bonded.

We exchanged numbers and I have been in touch with him over whattsapp, sending encouragement and letting him know I am praying for him. I also took him to lunch to celebrate him getting his 3-year visa, a big milestone on the path to getting asylum here. Over Arabic food he told me he believed that it was my prayers, and that it was my God that had given him hope.

These stories are just a few highlights. I wish I could tell you every story or even one of these more in depth. Perhaps one day I will write a book about our time here. But for now, we keep moving. There is little time for reflection as we serve him in such an awe-inspiring theater.

One thought on “A View From The Front Lines”